For those living in Colorado, and several other states, buying marijuana is not a big deal. You go to the dispensary, get your weed, or whatever cannabis-infused product you’re looking for, and go about your day. There are of course many laws regulating who can buy cannabis, where, when, the quantity and so on. Medical marijuana has been legal in Colorado since 2000, but recreational marijuana was legalized in the state only two years ago, on January 1st, 2014, to much fanfare and global media attention as it was the first time in the world that licensed stores could legally sell weed to basically anyone over the age of 21.

Boulder, Colorado has long been a bastion of the hippy movement and liberal countercultures. Most locals will tell you that weed has been a big part of the scene around here for decades. Terrapin Care Station is based in Boulder. It’s one of the largest cannabis retailers in Colorado and they were the first recreational cannabis dispensary to open in Boulder back in 2014.

Chris Woods is the owner, founder and president of Terrapin Care Station.  He said he’s worked every position in his business as it has grown immensely since it first opened in 2010 as a medical dispensary.

“It’s evolved a lot in the 6 years I’ve been doing this, I’ve done every job function within this company from doing books to bud tending to growing to trimming weed to acting as in house counsel.”

The company currently employs over 100 people, has four dispensaries, four cultivation facilities and is currently working on expanding the medicinal brand into Oregon and Massachusetts. Woods has been heavily involved in the bureaucracy of cannabis legalization, advocating for sensible laws and occasionally quarrelling with the city attorney’s office. In 2012, he was one of the largest financers in the successful campaign to pass Amendment 64 which regulates and taxes weed like alcohol and essentially opened the door for the “green rush” that is happening now in Colorado. Woods said the collaboration between retailers and regulators has helped legitimize the industry.

“I remember selling pot in zip lock bags in magic markers, dealing with questionable characters.  But I would say that the regulatory authorities have done a good job in weeding out the bad actors.”

Everyone takes their job seriously at Terrapin, but you can tell they also really love what they do. This sentiment is heard when talking with Woods and with the staff at the Terrapin’s flagship retail location at 1795 Folsom Street in Boulder. The dispensary manager Daniel Mullen said he felt drawn to the movement to legalize marijuana and, through regulation and keeping consumers informed, its benefits could extend beyond a physical experience.

“I really believe in the legalized marijuana. I believe in the medicinal properties and I believe what we are doing here is selling social change as opposed to really causing any problems.” 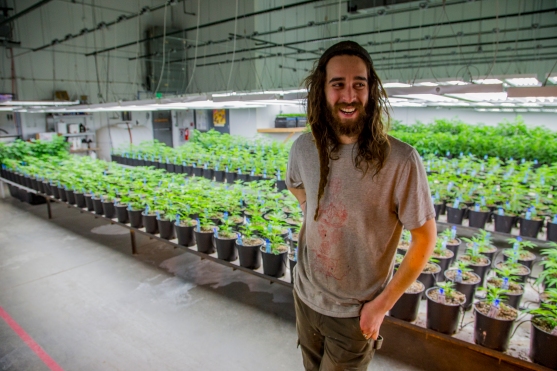 Ian Peak is one of three growers for Terrapin Care Station. He stands in the clone room of the Aurora, Colo. cultivations facility. 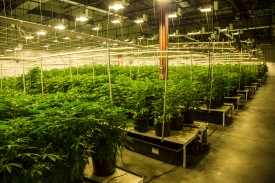 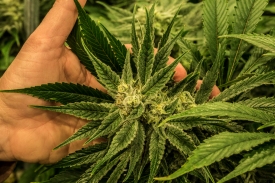 A marijuana plant is seen at the Terrapin Care Station cultivation facility on Dec. 17, 2015. 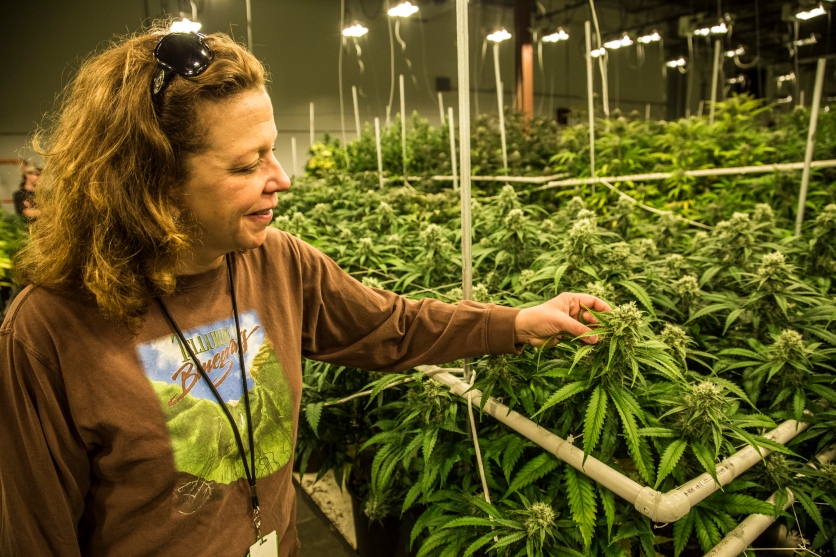 Christine Kirk is the production manager for Terraoin Care Station. She over sees the harvesters, packagers and many of the logistics of the “seed to sale” process that takes at the Aurora cultivation facility.

Terrapin’s retail stores can sell upwards of 10 pounds of weed on a given day and most of it is grown at the 15,000 square foot cultivation facility in Aurora, just west of Denver. Here, thousands of marijuana plants are perpetually grown from tiny clones into towering stalks six feet tall and are meticulously cared for by a team of growers. One of those growers is Ian Peak.

“We have a total of 3,000 plants including clone, veg and all the flowering…two flowering rooms.  It’s a continuous cycle, it never ends. It’s a lot of work but it’s a lot of fun,” Peak said.

A pointed skunky smell hangs in the thick, almost sticky, air inside the “veg room” of the warehouse. It’s a small forest of plants in here and not unlike a grocery in both size and layout, with rows and rows of plants as tall as Christmas trees. Their leaves fluttering in the breeze of fans and popping with precious buds in full bloom. They twinkle with trichomes, the THC resin the plant emits which gives it its psychoactive properties. This is a sure sign the plant is ready for harvest.

“We have a crew of harvesters that trim all of the parts of the plant that are not usable off, and get the buds ready to be dried and then pushed into production where we can get ready for sale.”

Back at the main office in Boulder, Chris Woods reflects on his personal commitment to this job. He said there are important compliance standards and public safety issues he considers priorities and that being involved in the legitimate organization and maintenance of the cannabis industry is most important to him.

“Every ounce of myself is part of this. It’s taking money out of the hands of drug dealers and putting it into a taxed and regulated environment and for that there’s nothing better I could be doing with my time and my money.”