Why do I do this to myself? Is this really my idea of a fun? What have I gotten myself into? These were some of the thoughts that crossed my mind as I tried in vain to find a tolerable sleeping position on a row of airport terminal seats during my overnight layover. I couldn’t bring myself to leave Morocco a minute sooner than I had to, so my choice to catch the last plane out of Marrakech at 11:00 p.m. left me to my own devices in the Barcelona airport for five hours, until my 7:00am plane took me back to Italy. As I squirmed in the clammy, stark, mostly vacant terminal in the middle of the night, trying to get a minimal amount of rest, I was still under the spell of The Red City. Visions of chaotic markets, narrow corridors clogged with vending carts and humanity, pink and orange clay walls bathed in sunlight and speckled with shadows, and the throbbing rhythm of distant drums all flashed in my head. I was in limbo, torn between two worlds. My body was headed back to the modern world I had known, but everything else of mine was still out there in the desert, still wandering through the medina. I wasn’t sure what I was searching for in Marrakech, but I knew that it held something special for me, that it had something I needed. I was drawn there, as if going there was predestined and I was following an invisible muse that had been expecting me. It was a trip into the glorious unknown. Marrakech is its own place. It is like nothing before.

The passages within the medina walls are a world of their own. Marrakech, Morocco.

There will be no lazy afternoons with the family, drifting in and out of a food coma, while watching football this year. The order of the day is mind-melting culture shock, unimagined sights of grandeur and the beginning stages of a real adventure. Today is Thanksgiving and I’m on the north rim of Africa. I landed in Marrakech in the early afternoon, and in short order met up with Brenden, one of my local contacts. He is an energetic, globetrotting Australian lad with lively blue eyes and a mischievous grin. Lately, he’s been spending his time in Morocco as a whitewater rafting guide and local fixer for travel companies. He is enigmatic, with a story for any occasion and an ability command your whole attention after the very first sentence.

We took a van from the airport through Marrakech’s urban sprawl, known as “The New City,” to a drop off point just outside the medina walls in the center of town. There, we hopped out of our shuttle and into the relentless tide of activity on the streets; buzzing scooters, haggard men with scruffy beards pulling makeshift carts, elderly beggars in worn kaftans and blown out leather slippers, young men on rickety bikes, cats, cops, packs of children, pickpockets and slack jawed tourists with cameras swinging from their necks all fight for real estate as the flow of humanity wove around itself. We passed through a rugged stone archway into the old part of town, and followed the crooked streets to our hostel. I had been in town for an hour, and my mind was already swimming in my skull. There was nothing that could have prepared me for this place.

An old man sits near the Souk El Haddadine area inside the medina of Marrakech, Morocco.

Street vendors and makeshifts buggies crowd the plazas inside the media of Marrakech, Morocco.

Brenden tells me that the sunset and evening calls to prayer are best enjoyed from the rooftop patio of our riad, a typical Moroccan estate that cradles a courtyard in the center of its four sides, with floors of rooms and a often a terrace on top. I toss my luggage in my room and navigate the maze of intricately tiled hallways to my perch overlooking the city. Clouds of a pink hue began to hover above the horizon as the sun descended. A soft light rolled over the low lying rooftops of buildings crammed inside the medina. It was calm, and actually quiet, up here, distant from the barrage of noises down on the street. The minaret of the Koutoubia Mosque, rising sharp and high from the cluttered city floor, began to show signs of life within its tower. A golden light issued from small square openings in the column’s walls. “Somebody was doing something in there,” I thought to myself. That was about my extent of certainty, at this point, about really  anything going on in this completely foreign place. 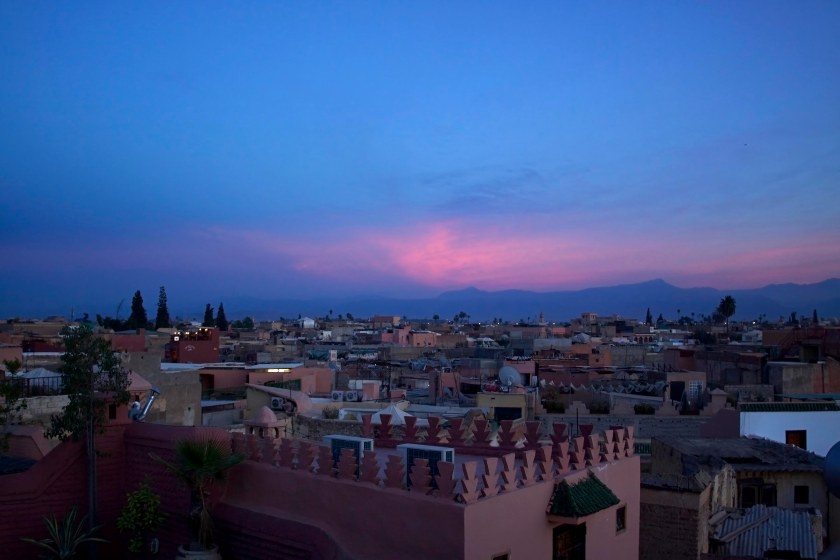 There was an electricity in the air, an undeniable sense of anticipation, as I waited for the imminent broadcast. I heard the crackle of a microphone, and then it began. A slowly rising, single note beaming out over the land. A haunting, mesmerizing beckon to the faithful. “Aaaaaaaaaa. Aaaaaaaaaaaallllllllaaaahhhhhhh. Aaaaaaaallllaaaahhhhh Aaakkkkbaaaaarrrrr.” The refrain “God is Great” came forth from one mosque to the next, chiming in at different intervals, making a stream of warbling notes. It swirled all around me, the chants tangled in the night sky. I was paralyzed with fascination and unnecessary trepidation. The sounds and atmosphere was mesmerizing, but it was just so damn unfamiliar to me that I could barely move my feet. It was beautiful and utterly surreal. I couldn’t imagine being further away from the world I have known, especially on this all-american turkey day. 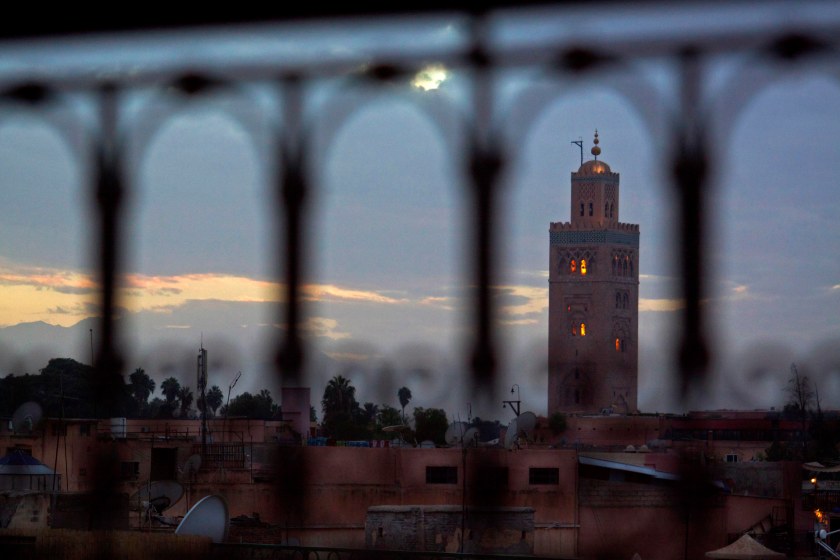 The minaret of the Koutoubia Mousque towers over the Marrakech, Morocco.

The rest of the night was filled with meeting fellow travelers in the riad lounge over a bountiful dinner of regional cuisine, prepared by a staff of jolly women that made it look all too easy. Brenden introduced me to Marcie and Brigid, fellow guides and co-workers of his in Morocco. Over the next few days they would show me a world here that I had to see to believe. As we enjoyed the essentials of local cuisine, a three-piece band entered the cozy, dimly lit dining room from the shadows of the patio. They played a rousing set of the traditional Moroccan music known as Gwana. A combination of religious poetry, cultural heritage, communal bonding and general celebration, the ancient, energetic sounds offered a glimpse into the African roots of American blues. The native tunes hypnotized and invigorated, the upbeat rhythms carried the stories of a hundred centuries.

Finally, I was immersed in the food, music and a culture of the place I have yearned to visit for years. I couldn’t be happier at this moment. Break out the huka, bring more mint tea and beer, I’m in for the long haul! Well, at least for the next few days! 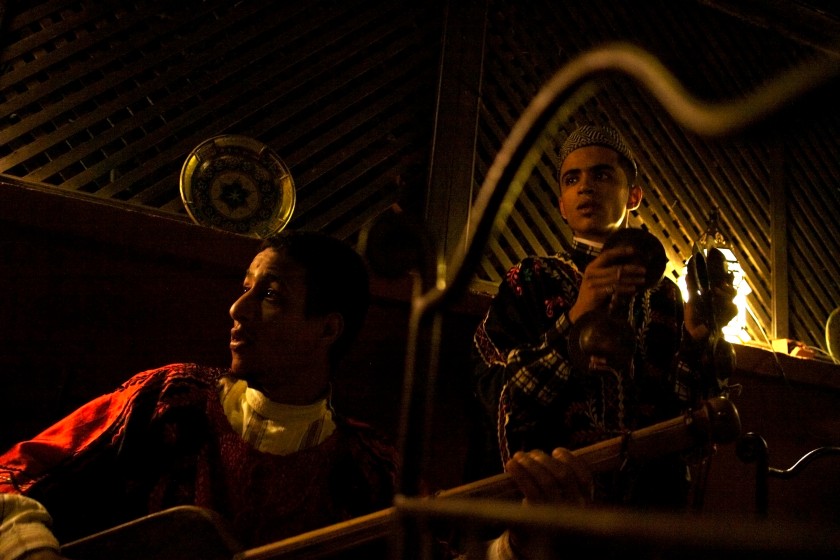