My phone is ringing on a Sunday night as I sit in a small neighborhood restaurant amongst chatty locals and happy families. I’m smiling to myself, reminiscing about the the past weekend’s events at Lago Bolsena and Viterbo. “Who would be calling me at this hour?” I wonder. It is my good friend Rifeldo, and there’s an urgent tone to his voice. “Tony! Where are you? What are you doing?” His thick Italian accent coming across in a loud, nervous voice. “I’m at Pucinellas, eating dinner. Why? What’s up?” I ask.

Last night Rifeldo had told me about the Processione di Santa Maria. It is a lively ceremony that Tuscania holds every year in honor of Saint Mary. He said that it was something I should be sure not to miss, as it brings out most of the citizens in this tranquil community, and that I was lucky to be in town to see it. He also said that it was going to be on Thursday night.
“Tony, I’m sorry! The Processione di Santa Maria is tonight! It’s starting in about an hour,” Rifeldo says. My leisurely dinner just got shot down, but I’m cool with that. I can get phenomenal Italian food whenever I want here, but documenting this event is an opportunity I’m not likely to get again. “Gotcha! I’m on it,” I tell my confused friend. I wolf down a couple more bites of pizza, toss a few Euros on the table and shoot out the door. I grab my camera gear at my house; batteries are charged, flashcards are empty, white balance and ISO are already dialed in, and I know that my 24mm, 2.8 lens is perfect for the job. I have been trolling these streets for weeks now, day and night, documenting and absorbing the colors, shadowplay and textures that saturate this place and renders one speechless on a daily basis. But, rarely have I had any company. Few have been down on the streets when I am, and those I have seen are still strangers with familiar faces. It’s just been me, my camera about a thousand years of history, until tonight.

This city is all the way live tonight. I can hear the sound of distant, faint drums carrying over the rooftops. I can feel an excitement in the air. We are in the heart of the Tuscania’s medieval center, commonly known as “inside the walls.” This is in reference to the stone barrier that surrounds this ancient part of town. I live in this neighborhood, and to say that it is as beautiful as it is old would be a sore understatement.

Groups of locals trickled down their side streets and into the piazzas, all flowing to the front steps of the Church of San Giovanni Decollato. The crowd in front of the church was a swirl of social and religious organizations, represented by their particular uniforms, attire and banners. Nuns in royal blue habits, priests in white gowns and ominous-looking crossbearers in vibrant red robes and pointed hoods could all be seen milling around. The crowd began to arrange and, as they took their positions, I took mine. I was crouched down, leaning against a wall, framing up the procession that looked like a colorful ribbon laid along the cobblestone road under the yellow light of the street lamps. A priest speaks into a wireless microphone; the crackling transmission is relayed through megaphones carried by assistants along the route. The faint broadcast echoes through the streets as if coming from an anonymous, basement radio station. “Viva la Santa Maria,” the priest yells. An eruption of applause ensues from everyone in earshot of the declaration. That’s their que! The hooded figures at the head of the line raise a rugged, wooden cross, flanked by two torch bearers. The procession begins.

The collage of different groups walk through the thin passages of the city streets, some with banners swaying above them while others are dressed in regal hats and sashes. There is a somber tone to their demeanor, a sense of solemness in their tribute to the Queen of Sorrows. Elderly men of noble regard walk at a slow pace, dawning black suits and shimmering crow feather hats that hang down past their shoulders. All of this makes for an intriguing display and sets the scene for the night’s central element; the figure of Santa Maria. This elegant monument is carried by nearly 20 men, and it doesn’t look like an easy job. The Santa Maria shrine is transported from it’s resting place at the altar inside the Church of San Giovanni Decollato to various points around the medieval city, including Piazza Italia where mass was held for a very large crowd. The procession ended where it began, culminating in a shower of fireworks that summed up the enthusiasm that this tranquil, yet very special, town is capable of.

Tuscania came to life for me tonight. I have been met with nothing but friendly locals, gracious hosts and warm receptions since I arrived here, but tonight I felt like I saw a true, unguarded side of Tuscania. I saw the people living their lives without catering to the new guy or showing him around town. They were doing what they do, and I am thankful that I was here to see it, to be a part of it.

Many religious and social organizations marched in the tribute to St. Mary in Tuscania, Italy on Sept. 15, 2013.

The monument of Santa Maria is carried into Piazza Italia in Tuscania, Italy. (2013)

Fireworks above the Church of San Giovanni Decollato signify the end of the Processione di Santa Maria. Tuscania, Italy. (2013) 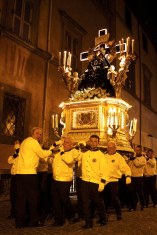 Men carry the monument of Santa Maria through the medieval section of Tuscania. Italy (2013)

Nuns pass by the medieval walls of Tuscania during the annual tribute to St. Mary. Tuscania, Italy. (2013)

An evening mass was held in Tuscania during the tribute to St. Mary. Tuscania, Italy. (2013)

A nun watches as the monument of Saint Mary is returned to the altar inside the Church of San Giovanni Decollato. Tuscania, Italy. (2013)